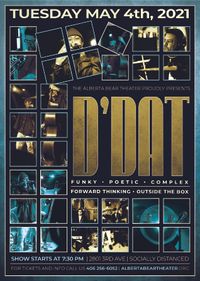 Having been featured on NPR, Yahoo, MIC.com, SiriusXM, TED Talks and more, DDAT has been described in the aforementioned terms for good reason. Blending national touring artist Def-i’s intelligent, poetic lyrics and hip hop style with the harddriving instrumental fire of award-winning trumpet player Delbert Anderson, the deep funk of international touring artist and drummer Nicholas Lucero, and the intellectually explorative and expanding groove of Mike McCluhan on bass, DDAT has carved its own path with high desert-forged influences and world-class musicianship.

DDAT is just at home in an intimate venue as it is on a festival stage, as the past several years have proven. The group has burned up smaller clubs, but it also has taken part in such memorable international collaborations as its concert with Mongolian master throat singer Baatarjav Erdene Tsogt. It has played beautiful theaters throughout the U.S. and Canada, while performing in highprofile outdoor settings such as the Taos Vortex Festival, the Ridgecrest Petroglyph Festival, ¡Globalquerque!. DDAT also has been featured at TED X and performed its trademark “DDAT Suite” with a full wind symphony at Eastern New Mexico State University.

Regardless of the setting, DDAT consistently delivers memorable performances with literally no boundaries.